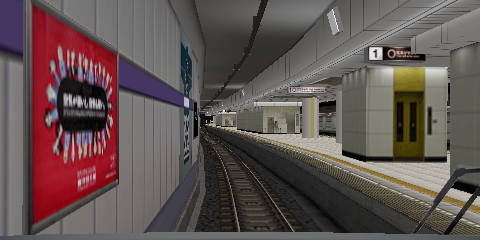 The Hanzomon line in Tokyo's subway. The line goes from Shibuya/Z01 to Oshiage/Z14. For OpenBVE there is the alternative C1367S for the class 08 subway train starting at the railway station Hikifune at the Tobu Isesaki line then going to the subway's Hanzomon line at which it then continues as train B1367S from Oshiage/Z14 to Shibuya/Z01.

In the beginning of the tunnel between Hikifune and Oshiage is a problem with transparency in the graphics that does not work properly. Openings in the wall to the left of the track are shown as blue.

It can be fixed by replacing the file entlight_a.bmp in the directory Railway\Route\hanzomon\enshin\abtob with a corrected version of entlight_a.bmp

From April 1 2004 (no April fools' joke) every station in the Tokyo subway has a normal station name in Japanese, but also a number. The number is composed of a western letter and two digits. The letter indicates at which line the station is, the number which station counted from one of the line's terminal stations.

Hanzomon line has the letter Z and the stations are numbered from 01 till 14, the terminus station Shibuya is station Z01 and the other terminus Oshiage is station Z14.

This number system was implemented to make it easier for foreigners to ride the subway.

The BVE 4 version of this route, which is compatible with OpenBVE, has disappeared from the creator's website.

This is search 80275 in the (English language) line directory