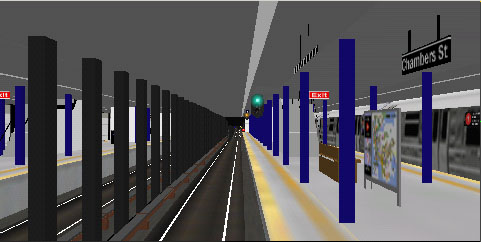 Line 2 in New York's subway (the Brooklyn line with the Flatbush branch line, part of the West Side line with the Brooklyn branch line, and finally the White Plains line, all former IRT), for the subway train class R-142 or class R-36 Redbird. The line begins at Flatbush Avenue/Brooklyn College in Brooklyn and goes through, among other stations, Times Square/42nd Street on Manhattan, where this simulation ends, to Wakefield/241st Street in Bronx. Detailed stations. Plenty of trackside signs and signals (with correct signal numbers). Soft curves and realistic switches, and also announcements of all stations and connections.

In OpenBVE there are problems with transparency in the graphics that don't work. It shows as blue lines around the destination signs on the class R-62 trains that appear along the line.